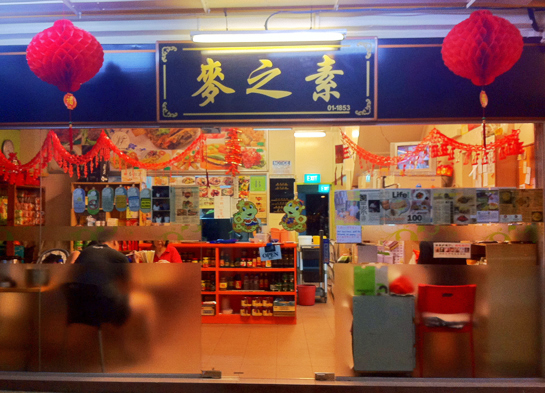 One of the best places for Singaporean as well as Chinese vegetarian cuisine in Singapore is Mai Zhi Su, a casual and unassuming coffeeshop-style eatery nestled beneath an Ang Mo Kio HDB block. Mai Zhi Su has an extensive menu that is divided into set meals (consisting mostly of vegetarian renditions of Singaporean favourites such as fishball noodles) and individual tze char dishes. The former is much cheaper – prices range from $4-6 – but their quality is unexceptional. Opt for the pricier but far more interesting and well-executed tze char dishes. At least 95% of the menu is vegan, so there is quite a lot of variety. However, a lot of the mock meat textures I tried were indistinguishable from one another – I would certainly appreciate more creativity in terms of types of mock meat used (such as more mushroom-based mock meat instead of simply soy-based mock meat) and the cooking techniques employed to effect different textures.

Generally, food was served very efficiently, portion sizes were satisfactory and the amicable boss always seemed happy to field questions about the food.

The following tze char dishes were all highlighted as specialty dishes in the menu. 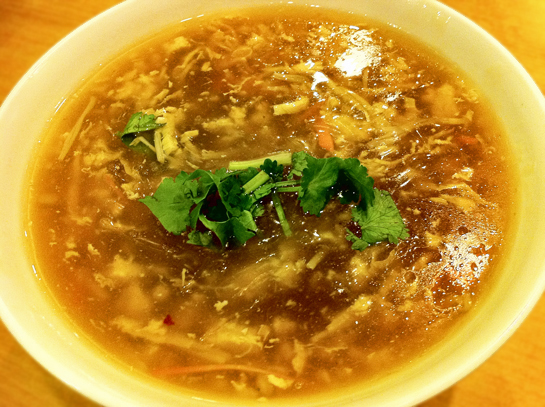 Mai Zhi Su’s Shark’s Fin Soup is a stellar example of why there is really no reason to continue eating conventional (as opposed to vegetarian) shark’s fin soup as a matter of texture and taste. The slightly chewy and crunchy mock shark’s fin, as well as strings of enoki mushrooms and carrot and tofu, created delightful textures and the delicious broth made for one of the best shark’s fin soups I’ve tried so far. Recommended. ($15 for a small portion, which feeds 2-3) 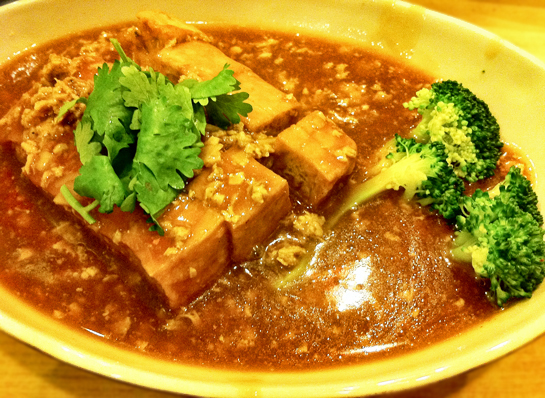 The Braised Coral Tofu dish, which was presumably made from a blend of tofu and coral seaweed (otherwise known as sea bird nest), was extremely hearty and satisfying. The tofu cakes were thick and dense and soy-based minced meat made the dish even more substantial. I also loved the perfectly pan-fried broccoli florets, which were beautifully bright green and crisp-tender. The broth was slightly too salty for my liking – perhaps there was too much fermented soybean paste – but all in all I would recommend this dish. ($10) 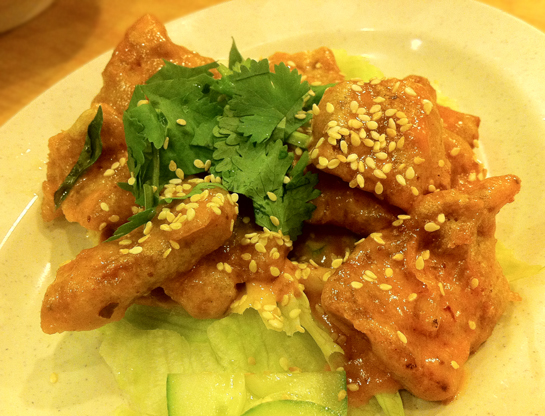 The crispy fried “spare ribs” were not particularly exciting in and of themselves as they were made from your run-of-the-mill soy-based mock meat, but the creamy and tangy homemade Thousand Island dressing hit the spot. The dressing wasn’t spicy in the least despite its advertisement as such, but it was good the way it was. Sesame seeds were a simple yet effective addition. The dish also came with some cucumber slices and iceberg lettuce, but they did not serve their ostensible purpose as a refreshing contrast as they were not very fresh. ($12) 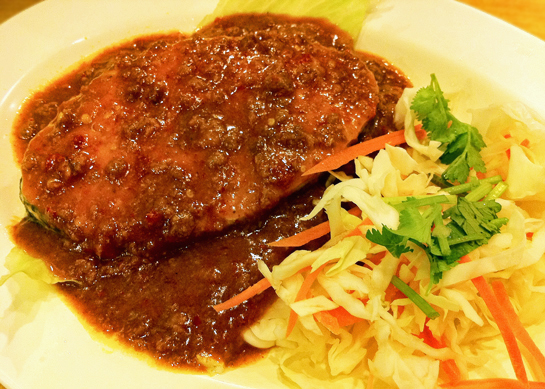 This dish essentially consisted of a very tender, tofu-based “fish fillet” in a sour and extremely spicy sauce. The sugar cane stalk that served as the backbone of the “fish” was a creative touch, but again, the raw vegetables on the side were rather pointless. ($12)

As mentioned earlier, the quality of the Singaporean hawker-style dishes was unexceptional. At best, it was tolerable. 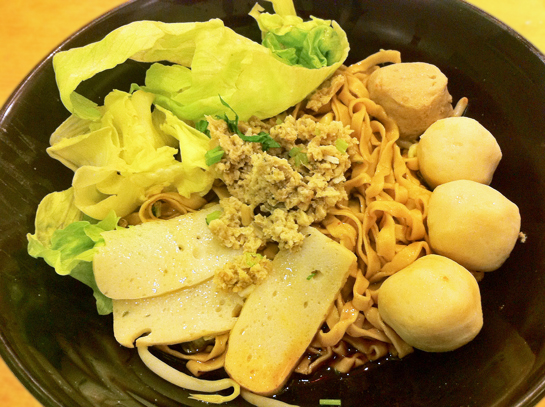 Mai Zhi Su’s yu yuan mian consisted of mock fish balls, meat ball, fish cake and minced meat with bean sprouts and lettuce served with mee pok and a small bowl of soup. The mock fish balls, meat ball and fish cake were nearly indistinguishable in taste and texture, the sauce tasted generic, and – perhaps worst of all – the mee pok noodles were limp and dead. But I suppose it was acceptable if you didn’t expect anything beyond the average quality of fishball noodles at hawker centres.

On a side note, fishball noodles have always been my favourite local food when I was growing up so please send me some tips if you know where to find amazing veg*n fishball noodles in Singapore! ($4) 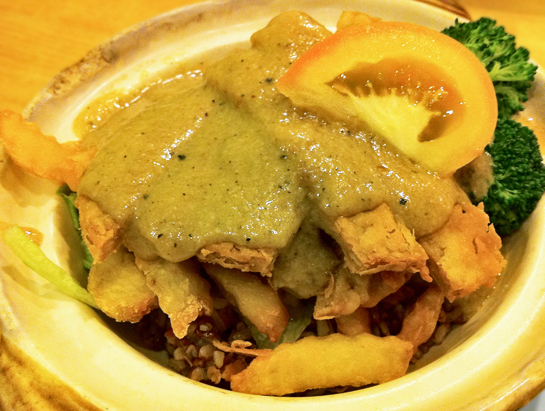 Fried soy-based “chicken” strips in a creamy mushroom sauce were served with French fries and a mixture of brown and white rice. The combination of French fries and rice baffled me. Perhaps the only thing I really liked about this dish was, once again, the perfectly cooked broccoli florets. ($6) 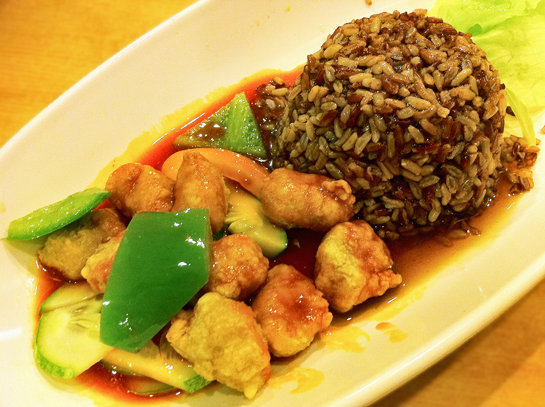 Here we have soy-based “pork” nuggets in a freshly made sweet and sour sauce that unfortunately wasn’t quite tart enough. I wouldn’t recommend this, especially since the portion leaned towards the small side, although the brown rice was sufficiently well-cooked. Also, by now, you might have realised it gets rather dull when all the mock meat is of the typical Chinese soy-based variety.  ($4.50, add $1 for brown rice)

Conclusion: It’s worth making a trip down to Mai Zhi Su to try their wide variety of Singaporean and Chinese cuisine, but forego the cheaper hawker style set meals at the back of the menu for the tze char dishes.

You are part of